A clear takeaway from Commercial Integrator’s Deep Dive on AV-over-IP is that integration firms feel a lot more comfortable recommending and deploying a network-based distribution solution for their clients than they did just a few years ago. Vanco International, meanwhile, spent much of the AV-over-IP adoption period working on and perfecting its Vanco Evolution EVO-IP HDMI over IP offering, according to president Mark Corbin.

Recently launched in September of last year, the timing is right for integrators gravitating to AV-over-IP to check out some of the features that Corbin says integrators won’t find elsewhere. “The system is really unique compared to a lot of competitors out there,” he says in a Commercial Integrator video interview.

“It took us about 3 1/2 years to completely finish the process between the hardware manufacturing and software. This being an HDMI over IP system it is very important that the software be reliable and very stable – and it also needs to be expandable.”

The EVO-IP HDMI over IP solution goes beyond the splitting and switching of many other distribution solutions, Corbin says. 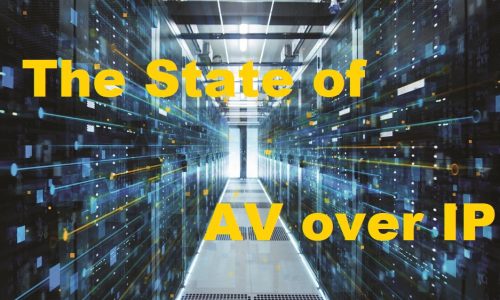 Related: Comparing AV over IP: NONE of These is Just Like the Other
“It allows you to do a complete video wall system up to a 5 x 5 system. You can do that multiple times within a run.”

He adds that it provides versatile digital signage options that create new opportunities for integrators and their customers.

A big benefit of EVO-IP HDMI over IP, Corbin adds, is remote monitoring capabilities. “Everything is a cloud-based system,” he says, “so the integrator can go into the system and monitor it. If there’s any kind of a problem or any kind of system malfunction it actually alerts the integrator or even the end user if needed. They can actually diagnose the system from their own computer which is really unique.”

The Vanco Evolution EVO-IP HDMI over IP system manages, transmits, and receives AV and control for hundreds of devices over a local network.

According to the explanation from director of new product development Brandon White in the video above, the EVO-IP HDMI over IP system can be set up in three different ways:

“We have an easy-to-use interface to allow anyone to set up a system. Ultimately, time is money, so we’re trying to reduce the time to set up an IP-based system – any new transmitter or receiver is automatically found in the system,” says White at the Vanco InfoComm 2018 booth.

Recurring Revenue Opportunities in the Cloud

Once connected to the cloud, the Vanco Evolution EVO-IP can schedule mappings and monitor how transmitters interact with receivers. If a video drops out, the system will automatically address initial concerns and email a self-analysis report to the installer.