Related: CI State of the Industry 2018: The Incredible Shrinking AV Industry
As a reporter covering the AV integration industry, I’ll admit that each year I have my fingers crossed while the survey is live with integrators and AV consultants providing their information. I want to report on a healthy, thriving and viable industry – and I hope for numbers that will reflect that reality.

I was able to do that, in many ways, last year. CI reported that 91 percent of respondents claim their overall business climate is positive. Over a third foresaw 2018 revenue growth of at least 11 percent.

We were able to predict based on data collected from our 2018 survey that the industry would grow by 9.45 percent in 2018. That followed 7.6 percent calculated growth in 2017.

When the numbers from the 2019 State of the Industry survey are in, I hope they show a continued positive trend. I wouldn’t be doing my job, however, if I didn’t also report on the negative tendencies continually revealed in our industry analysis.

So, again, fingers crossed that the following business-crushing AV trends don’t continue, according to CI’s 2019 State of the Industry Report.

You don’t have to be an economist to see the consistently well-documented reality that the majority of the AV integration industry is heading down the wrong path and, even worse, that it’s reluctant to change direction. That brings us to the all-too-familiar topics of the industry’s lack of service-related revenue and ever-dwindling product margins.

That’s more than half of AV integration firms that exist without any significant service revenue.

About another third earned between 1-5 percent of their revenue from service.

Right there, that’s more than half of AV integration firms that exist without any significant service revenue. Only 9 percent of respondents say that more than a third of their revenue stems from service.

That means that an overwhelming majority of the AV integration industry still lives and dies by product- and project-margin.

According to last year’s survey, 63 percent (so pretty much two-thirds) of the industry say their typical hardware margin (not markup) on a project is 20 percent or lower. That figure actually held pretty steady from the previous year.

It could be higher if, for instance, integration firms could charge more for their expert labor. We reported last year that three-quarters of AV integrators charge under $100 per hour for their typical technician labor rate.

That, however, is only sustainable if we see labor rates and percentage of revenue under contract begin to climb. NSCA has an entire event, Pivot to Profit, built around the premise that while it may not be easy for AV integration firms to make the transition away from product margins and toward service revenue, it’s a must.

Another AV trends concern is related to typical AV integration firms’ ability to work with confidence with (and install confidence in) their customers’ IT departments. It’s extremely well documented that the folks making AV technology purchasing decisions within customers’ organizations typically work in IT.

They’re not facilities managers, as they usually were back when CI and NSCA launched this survey in 2010. And there are very few “AV managers” left. 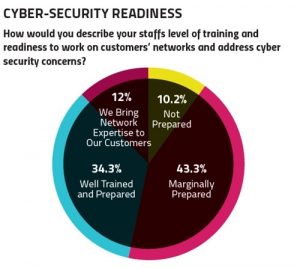 If the key decision makers within the customer’s organization don’t have confidence in a vendor, they simply won’t hire them.

Last year’s survey hammered home the reality that AV is sold to IT managers and IT professionals.

That’s a problem for more than half of last year’s respondents who indicated that they’re not adequately prepared to address their customers’ cybersecurity concerns.

Honestly, how can an AV integration firm expect to sell and install products that will be on or affect their customers’ networks – and pass the muster with the IT departments – if they can’t also present sales professionals and system designers that are highly trained in networking and cybersecurity?

There is nothing more important to an IT director than cybersecurity.

If the key decision makers within the customer’s organization don’t have confidence in a vendor, they simply won’t hire them. That’s why I hope the cybersecurity readiness figure rises in CI’s 2019 State of the Industry survey.

When the numbers are crunched and it’s all said and done, I expect there to be plenty of positive results to share in CI’s 2019 State of the Industry Report.

The problem is that if these two business-crushing AV trends remain evident, they’ll continue to cast a large shadow over AV integration market.