Video walls are everywhere these days – corporate lobbies, university welcome centers, your doctor’s office! It wasn’t like this just a few years ago. One of the keys to video walls’ meteoric rise in demand and popularity is the changing role that video roll processors play.

Consider that in the AV industry, when discussing displays – bigger is better. We are seeing a trend of increasing screen size across all use cases. Average flat panel sizes have been steadily increasing, from 42-inch to 46-inch and most recently to 55-inch and beyond. LCD displays are available near 100-inch diagonal – but this is still not sufficient for many large screen applications.

Projection has filled that gap in display sizes for many years, but video walls with thinner bezel LCDs, have usurped that role in many cases. Video walls have hardly been a new concept, starting with stacking consumer televisions back in the day, to rear projection cubes, and now to modern LCD and LED based walls.

However, it is the (relatively) recent leap forward in video wall processing that has made video walls far more common. The video wall processor is indispensable but many integrators are unclear in understanding the types and what they can and cannot do. Our goal is to clear up the confusion.

When discussing a comparison of video wall processing technologies, it is important to realize that there are several categories of processors available today. The most common is the “daisy chain scalar” or daisy chain processor that most commercial LCD flat panels provide built-in.

This daisy chain is a very simplistic (yet effective) approach to some video walls. 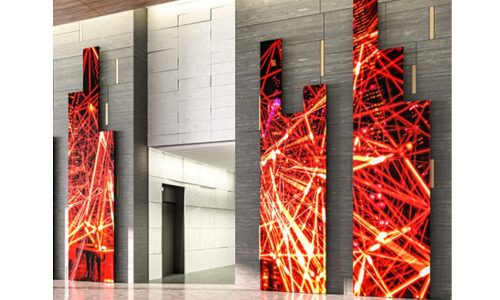 Related: The Video Walls Market in 2019
However, this approach is not without its limitations (which are frequently misunderstood).

The daisy chain is only appropriate for 16:9 configurations, meaning you must have a configuration that is linear in nature – 2×2, 3×3, 4×4, and so on.

Creating a video wall that is a different shape (aka aspect ratio) will cause the daisy chain to stretch or squish the content you provide it to fill that videowall, distorting your content. In addition, you may only show a single source at once on a video wall built in this manner.

Neither of these issues should be a deal breaker but suffice it to say that this type of video wall solution does not suit all applications. While this type of processor is very cost effective (the processor itself is free, and the cables to connect the displays – which would be purchased regardless – are quite inexpensive), you must use it carefully, knowing its limitations to ensure it will meet the needs of the end user. 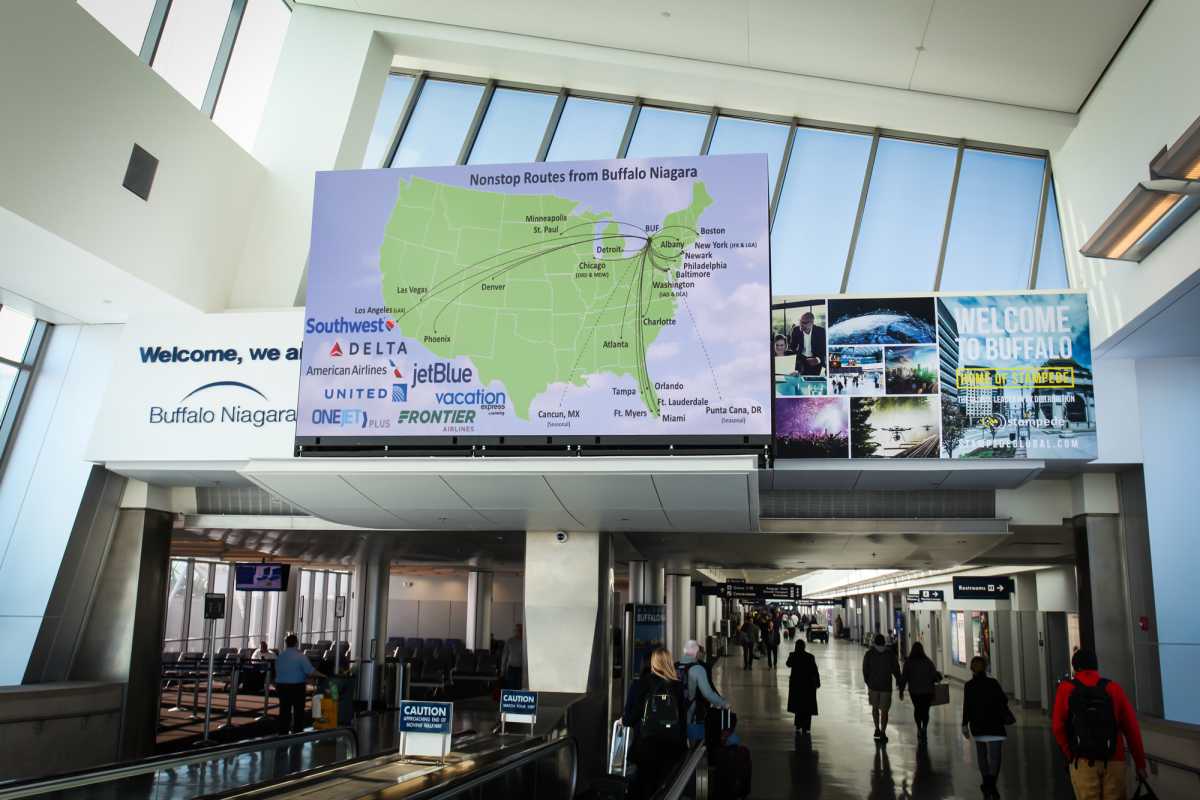 A second type of common (but application specific) video wall processor involves the use of multi-display output graphics cards in a computer.

Like a daisy chain processor, this appears to be a very simple way to implement a video wall – and on the surface that is correct.

Like a daisy chain processor, this appears to be a very simple way to implement a video wall – and on the surface that is correct. Essentially, an integrator supplies a computer with a graphics card that has multiple video outputs, enough that each LCD in the intended video wall can be directly connected. This has become practical only in recent years, with both AMD and NVIDIA offering solutions (from a number of different manufacturers) that have two or more outputs per card (and four is not unheard of). The computer then recognizes each display and provides it with its own desktop environment.

Most modern operating systems can allow windows to span multiple desktops (and any modern OS will support multiple windows). This will give the end user a large environment to set up their applications to show how they see fit. Ultimately, this is both the strength and the weakness of this sort of video wall.

Each source must be an application from that computer or connected via a capture device. The OS may support this use case, but it was not intended for it – scaling, sizing, and lack of presets and easy ways to manage the multiple desktop environments will be a result.

Finally, the fact that the displays must be directly connected via a video cable of some format (generally either HDMI or DisplayPort), the displays may only be so far from the computer; this is a limit of the video signal standard.

The third most common type of video wall processor is the dedicated hardware processor. This type of processor has been around since the advent of video walls.

While the dedicated processor has understandably advanced over the years, the core design concept remains the same. You start with a dedicated hardware “box” or chassis, which will have a specific set of video inputs and video outputs.

The dedicated processor will contain the necessary processing intelligence to create a single canvas of video that is sent to the video wall array, regardless of its configuration.

The dedicated processor will contain the necessary processing intelligence to create a single canvas of video that is sent to the video wall array, regardless of its configuration. Having multiple inputs provides for the ability to show more than one source simultaneously, and the internal processing provides for windowing, scaling, and presets for how content sources are shown. This is far more powerful than a daisy chain.

However, dedicated hardware processors are not without their limits either.

First, they are a dedicated piece of hardware. This means that there is a set (and fixed) number (and type) of video inputs and outputs. Over recent years, higher end models have transitioned to a modular-type chassis, allowing input and outputs to be resident on cards that can be swapped, or added for expansion – but you still have a limited number of slots to place those into.

The most advanced dedicated hardware processors might feature their own type of daisy chaining (or stacking, like a network switch) to attempt to remedy this, but essentially you are still dealing with a fixed capacity the integrator must plan around (and often requiring planning for the entire foreseeable life of the video wall. No small challenge).

Secondly, the video inputs and outputs are physically resident on the device itself. This means (that like a multi-output graphics card solution) you have the video cabling standards presenting limitations in the distance the LCDs and sources can be from the box. This can provide a design challenge. For example, HDMI may only run around 30’ (without any kind of specialized extension).

Integrators have been working around this by utilizing signal extension solutions – fiber optic or amplified cables, category cable baluns, HDBaseT extenders, or even IP streaming (in some cases). However, as is likely apparent, this does not eliminate all problems. By using these sorts of additional technologies, the integrator has introduced additional points of failure, higher cost, and a more complex installation.

Cost is another key factor. Dedicated hardware is more expensive than the previously discussed processor types, which can provide issue with some end-user’s budgets. 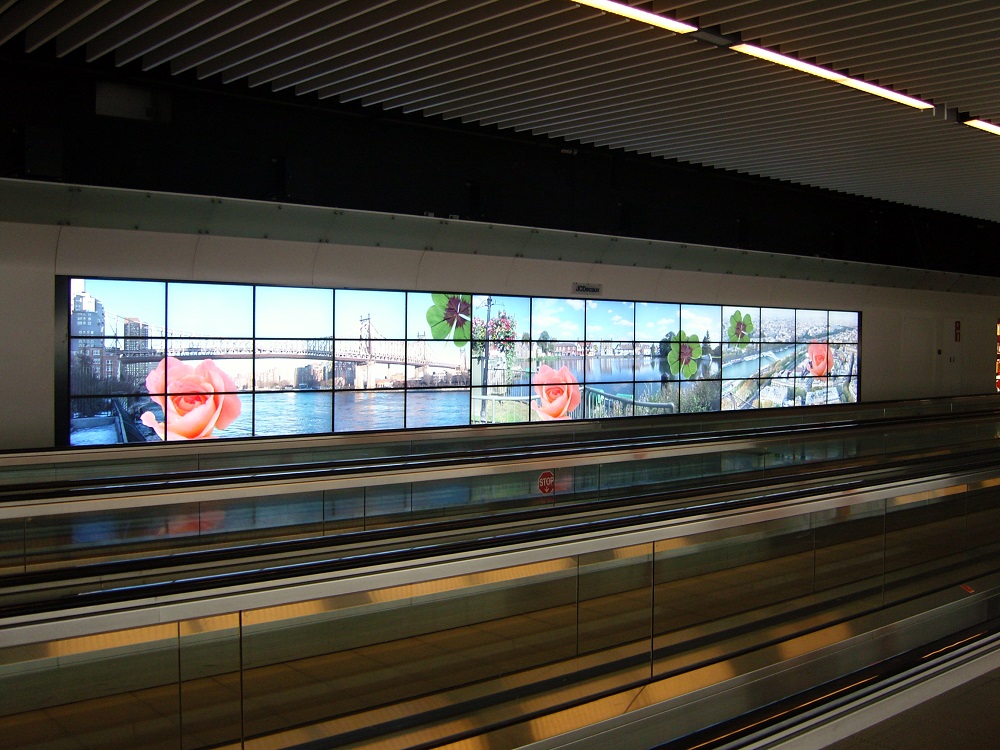 Lastly, we move into the realm of the most recent type of video wall processor – distributed visualization. This processor type is relatively recent, and will fall into one of two categories, both aimed at addressing the limitations and challenges of the traditional video wall processors previously discussed.

IP is a proven and long-term technology in place everywhere and removes the limits of HDMI or DisplayPort.

The key principle behind both types of distributed visualization is the elimination of the traditional video backbone and monolithic architecture used by all previous types of processing – moving instead to utilizing IP networking as the transport methodology.

IP is a proven and long-term technology in place everywhere and removes the limits of HDMI or DisplayPort. The cables can be hundreds of feet long, and each switch acts as a repeater or extension, allowing nearly unlimited distance. Also, by using common networking equipment and techniques, you remove proprietary extenders and improve reliability while lowering cost.

Category cable is incredibly inexpensive, easy to pull, and easy to terminate – no integrator should really have a challenge in working with this (unlike HDMI or DP, in many cases). Common gigabit switches and equipment are readily available, and easy to work with, making this infrastructure incredibly approachable – in fact, IP network most likely represents the ultimate future of the entire AV industry.

The user then works with a standard computer running proprietary control software to manage the same type of processing demonstrated by the single dedicated hardware processor but using much less specific hardware. Each display requires a proprietary device, but the network-based backbone offers the benefits mentioned above.

The second category is the software based distributed visualization system. This type of processor simply uses the same standard networking (and attendant benefits), but instead of proprietary hardware, uses software installed onto off-the-shelf computers that can be sourced from any vendor.

Related: The Video Walls Market in 2019
This approach offers all the benefits of the network backbone (lack of distance limitations, low cost infrastructure, ease of installation) – but adds the removal of all proprietary hardware. What this means is that it can easily be upgraded as time goes on; there are no boxes to replace, just applications to update. This features is as close to the fabled “future-proofing” that integrators and end users alike all seek. If a new display type, or new standard / resolution becomes common, the integrator can update the PC, and install the latest processor applications to address these new features.

The use of standard PCs means that end users or integrators can leverage buying programs with major vendors like HP, Lenovo, or Dell – who can sell equipment in far larger volumes than what most AV manufacturers can – providing lower costs than other solutions. This type of solution is also infinitely scalable – if you have IP addresses, you can add another display, or another source; adding sources is as simple as installing the source application or using a hardware encoder (similar to a hardware based distributed visualization system).

One could delve deeper into specific features of each type of video wall processor, and inevitably there would be reasons why specific brands might be favored. However, it should be clear from this discussion of overall architectures why distributed visualization and more specifically software-based versions are most likely the wave of the future. Users will always have personal preferences about technologies – but this type of approach truly does make video walls more cost effective, scalable, and easier to install.

Ultimately it removes constraints to future proofing and unleashes the power of what a video wall can do.