New Crestron CEO Dan Feldstein jokes, “First I was born, and then I started working at Crestron. That’s pretty much how it goes.” To say that Feldstein has Crestron in his DNA would be an understatement.

“My involvement with the company goes back to my earliest memories, whether it was wandering around the stock room, or picking out parts to tinker around for some project,” he says. “I love being around the company, and being around my father. I would come up with an idea and we’d sit after dinner, and he’d draw the circuit up for me. Then, the next day I would pick out all my parts and try to build it. It really was just part of who I was, being around Crestron.”

Feldstein, the son of company founder and industry icon George Feldstein, has ascended to the top spot in the Rockleigh, N.J.-based juggernaut after working his way up through multiple departments in the company. He literally has spent years being prepared to take on the role of CEO.

He sat down with Commercial Integrator’s sister publication CE Pro in person at InfoComm 2021 to discuss his goals for the company, address the constant speculation that Crestron is going public or being sold, review the current supply chain situation, and set the expectations for both residential and commercial AV integrators about what to expect from the company over the next five to 10 years.

CE Pro: How did you get into the operational side of the business?

Feldstein: I went to Rensselaer Polytechnic Institute for computer systems engineering and then graduated with that degree in ‘94. Then, I came immediately to work for Crestron. I worked as a software engineer and started writing some firmware as well, and did that for about eight years. Then, I had an opportunity to move out of engineering to help support the company’s implementation of our SAP ERP system.

It was interesting because we chose SAP, which was really above our heads at that time. It was a big lift for us to implement such a massive software platform. We were that confident that we were not done growing — we were just starting, and going to move forward. We wanted a platform that would support that, and it’s been great. We’re still using that platform, still building on it constantly.

That was really my foray into the operational side. Then, we started building our research center and I was involved in that project as well and headed up that team. A few years later, we built out our Orangeburg, N.Y., building. After that, I got a little more heavily into that side, into the facility’s side. I was also involved in human resources and accounting as well, and IT.

CE Pro: What has kept Crestron in such a leadership role in the industry for so many years?

Feldstein: Well, I think the key is, and it started with my father, it was our drive and our passion to always push things forward, to always try to do our best in whatever we did. Also, because of the foundation he built and kept it as a private company, 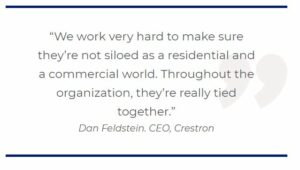 it gave us the flexibility and the agility to always do what we felt was right for our people, for our customers, for our industry. The company doesn’t have to push to achieve quarterly results for investors — we can take a long view of things and build a good, strong team that is able to build these products and sustain them into the future. I think that’s helped a lot.

CE Pro: We have heard multiple rumors that Microsoft was buying Crestron over the years. Is that true?

Feldstein: Well, that’s fine… but they didn’t call me. Don’t believe the rumors.

CE Pro: Coming in as CEO, are there pet projects or things that you really want to see Crestron gravitate toward?

Feldstein: Generally speaking, it’s about staying the course and moving forward. In terms of my own leadership aspects, I want to bring more collaboration. I think we can always improve on that. Also, I want to empower our people. As we grow, it’s all about scalability; I can’t try to do it all myself. I have a great team. I’ve been working to get comfortable with how they operate, understanding what their instincts are telling them to do, and then empowering them to go out and do that.

CE Pro: What are the future prospects for Crestron serving both the commercial and residential markets, and which of those markets gets you most excited?

Feldstein: What gets me most excited is that we’re in both spaces. I think that’s really an important position for us because we’re able to leverage a lot of the technology in the commercial space into the residential space, and vice versa. A perfect example was during the pandemic when we were able to develop some work-from-home products because of our knowledge of both industries. A lot of other manufacturers could not even fathom doing something like that because they only know one space.

Our customers ultimately are people who today work and live at a home. If we can service them in every aspect of their lives, we really can give them a comprehensive, complete solution and complete environment.

Now with Crestron, they can have a consistent experience across both their work life and their home life. That’s one of the reasons I think it’s great that we’re involved in both the residential and commercial markets.

Another reason is that when one market goes up, maybe the other is falling off. They balance each other out. It allows us to stay financially stable. One can prop up the other. When somebody is down, you help them out; when you’re down, they help you out. It’s the same thing with us. If the residential market is booming and doing great, maybe we can help support the commercial side and vice versa. I think there’s a lot of synergies in how we approach both markets.

CE Pro: Where do you see Crestron five years or 10 years from now?

Feldstein: I see us moving forward, growing and continuing to develop new platforms and products, and finding new and better ways to partner with our dealers and with our customers.

As long as we have the financial wherewithal to keep doing it, we’re going to stay private because I think that gives us our best chance of success. Quite honestly, that’s what makes it fun … the ability to do what we want to do and do it the right way, because we know that’s the right way to do it. Not because, ‘Oh, the bank’s going to call in a note or the investors want their money out so we’ve got to do this.’ The only calls I want are my customers telling me, ‘This is what we need,’ and then we can work with them and get them that.

Feldstein: The biggest thing that all of us need to do now, especially given these supply chain issues, is plan ahead. We can apologize for our back-order situation until we’re blue in the face, but it’s not going to change anything because we’re doing everything we can. Many of the supply chain problems are out of our control. The one thing that is in our control is the sooner you place an order, the sooner we can try to fulfill that order. The sooner you get to the front of line, the sooner you are the next up to receive your products.
It really emphasizes the need to plan your business, and not just during this supply chain situation. As we grow and scale, we can’t guarantee that we will always have a 100% of everything in stock all the time. It’s not practical… we’ll try, but we can’t guarantee it.

If integration companies change their methods and start to submit their orders earlier, we can all have a much healthier supply chain for the long term.

Feldstein: Some of our component suppliers are giving us very long lead times. In some cases, those components are cross multiple products. Some products are affected more than others; it really varies right now. Unfortunately, the information we’re getting from our vendors and from our chip manufacturers is changing constantly. It’s really hard to stay on top of it.

CE Pro: Are you less affected than others because of your Mexico factories versus China where most other companies have their manufacturing?

Dan Feldstein: I don’t believe it’s because of that. I think we’re less affected because we saw this coming a little sooner than some.

Because we’re a private company, I was able to release extra funds to our supply chain team and start placing our orders early. We placed firm purchase orders and commitments to buy these parts as soon as we saw this coming. We’re confident that we’re getting better allocations and hopefully allocations sooner than others.

CE Pro: Any predictions on when the supply chain backlog might ease?

Feldstein: I think certain components will start to ease maybe within six months, but I think some of the chip issues could be with us possibly for a couple years.