The Tulalip Resort Casino (TRC) is an elegant destination located in Quil Ceda Village, Washington. Opened and operated by the Tulalip Tribes of Washington since 2004, the TRC houses an impressive 12-story hotel with 370 rooms, a 192,000-square-foot casino, seven restaurants, meeting rooms, an amphitheater, and a world-class spa.

Digital signage is a hallmark of the bustling TRC. Monitors throughout the property direct guests to events, display sports broadcasts inside the TRC’s Draft Sports Bar & Grill, and keep casino players informed of the latest promotions. The sports gaming area is also packed with monitors showing live games from across the country—both to let bettors keep an eye on their favorite teams and to impart energy into this section of the casino.

The TRC has been steadily feeding a growing network of monitors using the cloud-based Kramer Control system. Built with drag-and-drop functionality, remote-control capabilities, and built-in system analytics, Kramer Control has made life easy for Aaron Jackson, who leads AV technical and integration support for TRC. 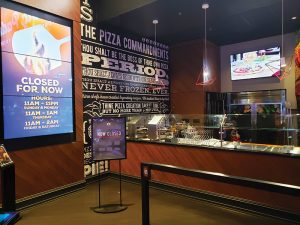 “Set-up is straightforward with Kramer Control,” said Jackson, an AV pro with extensive programming experience. “That’s why we gravitated towards this system. Kramer has the ‘full-stack’ more than anyone else on the market, especially when it comes to the drivers being pre-written for Kramer Control. The TRC’s in-house IT staff also find Kramer Control simple to use. It’s easy to scale up when needed.”

This said, the current level of digital signage at this dynamic casino is beyond what many hard-wired, switched matrix AV systems can easily handle. This is why the Tulalip Resort Casino—with Jackson’s expertise—recently migrated to an AV over IP signal architecture. Jackson installed Kramer’s KDS-EN6 / KDS-DEC6 AV over IP encoders/decoders offering low latency 4K60 4:2:0 video/audio/RS-232/IR/USB over an enterprise network. The scalable media distribution system also supports HDCP 2.2. Moving to AV over IP has vastly increased the scalability, capacity, and flexibility of the property’s digital signage network, both in terms of the playout channels being supported at any one time, and the groupings of monitors to which these signals can be sent.

“When the Tulalip Resort Casino wanted to extend digital signage throughout its property, Kramer AV over IP was the only realistic solution,” said Chris Kopin, VP of Technology at Kramer US. “Today, the TRC has a high-performance AV over IP network that meets all of their digital signage needs—and then some.”

Anatomy of the AV over IP System

To move AV signals over IP throughout the Tulalip Resort Casino, Aaron Jackson has leveraged network throughput of 10 Gbps with a redundant 10-Gb link aggregation group (LAG). This connects to the TRC’s Network Operations Center on the hotel’s admin level, which is home to various audiovisual servers, the Kramer Control system, a powerful Scala digital signage management platform, and more than 60 Kramer KDS-EN6 4K60 4:2:0 HDCP 2.2 video encoders. Also notable is the fact that Kramer’s encoders and decoders only require a 1 Gbps throughput, though a 10 Gb backbone was chosen for this project.

The encoders send the signals via the 10 Gbps network to hundreds of Kramer KDS-DEC6 4K60 4:2:0 HDCP 2.2 decoders. These are connected to monitors throughout the TRC. According to Jackson, there are more than 300 decoders in the TRC—and the number keeps growing.

“The sheer number of data flows is impressive,” added Jackson.

The scalers built into the Kramer decoders allow for image rotation for screens mounted vertically or horizontally. Any changes in monitor resolution (as 4K monitors are added), or orientation, will not complicate the process for TRC’s IT staff. Everything signal-based can be deployed from the Network Operations Center.

“The fact that the Kramer encoders/decoders are 4K gives us some room to grow, especially since there isn’t much 4K content available today,” Jackson observed. “Right now, the cameras within the TRC are HD, as is most of the playout content, including a marketing video loop that runs when the digital signs are not showing dedicated content. But times are changing, and 4K is coming. Meanwhile, the fact that this is an AV over IP system means the TRC’s IT staff can easily change up the playout order, and switch in new content as they see fit.”

Aaron Jackson is very much the AV ‘go-to guy’ for the Tulalip Resort Casino. He lives and works eight miles away from the property in scenic Washington state. 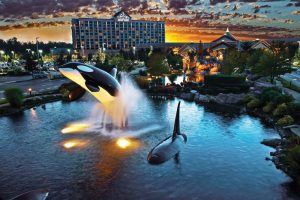 For the Kramer Control system, Jackson’s physical location is not an issue. Using a password-protected web portal, he can sign into the system at any time and make whatever configuration changes the client wants.

“Aaron can sign in and monitor what’s happening on the TRC’s digital signage network using Kramer Control,” said Kopin. “He can also change signal distribution configurations and troubleshoot any issues using Kramer Network, our cloud-based management tool that lets you manage AV like it’s IT.”

“I like the Admin Room View feature, because it lets you get remote access to every device in the room,” said Jackson. “The TRC’s in-house IT people like it as well, because we both can use Admin Room View to drill down into a given space and answer questions such as, ‘which decoder is it using? Which options does it offer us to configure it?”

Moving to an AV over IP signal delivery system has given the Tulalip Resort Casino the headroom it needs to add extra monitors, expand its range of playout channels, and migrate to 4K content when the time seems right. The strategy adds value now and in the long term.

“Because we have the best combination of both value and performance when it comes to our AV over IP, control and audio solutions for pro AV,” said Clint Hoffman, CEO of Kramer Electronics US. “Right now, that is a like a well-kept secret amongst a particular group of integrators, but those integrators that know this about Kramer in 2019 are making great profits with our highly reliable offerings.”

This is a level of flexibility that was impossible with the TRC’s former hard-wired/matrix-based AV distribution system. In adopting AV over IP, the Tulalip Resort Casino has bought itself a lot of space to expand its roster of digital signage monitors, the variety of channels they can display, and the resolution they use in the years to come.